I was honored to be able to interview Michelle Nguyen, lead event planner from Bubble Punch (the event production company responsible for Rilakkuma Day), to give you the inside scoop on Rilakkuma Day 2014 – enjoy!

What was your impression about the event overall?
The event was a huge success. We had so many fans from so many different places come and visit FAO Schwarz just to see Rilakkuma and get a chance to snap up the latest products! We had trouble restocking the shelves fast enough! We were also really happy that a lot of fans hung out and talked to our staff about their love of Rilakkuma, and it seems like a lot of fans even got together and made new friends there with like-minded Rilakkuma lovers!

What was your personal favorite moment from the event?
When Rilakkuma emerged for the first time in FAO, there was a palpable excitement in the air! People were clapping and yelling and trying to take photos as Rilakkuma slowly walked over to the photo area. It was so exciting and I was very happy with the response.

What aspect of the event did the fans enjoy most?
Meeting Rilakkuma was definitely at the top of all the mega-fans’ lists, I think, as well as buying the newly released products! A lot of fans had fun just hanging out in the store and meeting each other too!

What’s your favorite item out of all of the Rilakkuma products out today?
I love the Rilakkuma and Korilakkuma kigurumi outfits. I wear mine when it’s cold in the house and during Halloween basically every year.

Which one seems to be the most popular product among fans?
The medium sized Rilakkuma plushies were the first to run out!

What’s next for Bubble Punch, Rilakkuma/San-X-related or otherwise?
We have big plans for 2015, but we can’t quite talk about them yet! Stay tuned!

Who is your favorite: Rilakkuma, Korilakkuma, or Kiiroitori – and why?
I really like them all… they’re all so unique and weird (if that’s even the right word). I enjoy how they are kawaii characters, but that there’s another layer of awkward laziness to them all. They even fight sometimes, which I think is really hilarious.

Thank you so much to Michelle for sharing your thoughts and experiences with the Rilakkuma community! We’re all looking forward to see what Bubble Punch will have in store for everyone in the future!

Fellow Rilakkuma blogger Ellie was able to go to Rilakkuma Day 2014 herself; read all about her awesome day over at her blog!

Speaking of which, in her Rilakkuma Day post, Ellie wrote a little bit about how she noticed that AQI (Aliquantum International) has begun expanding their licensed plushie line to include designs and costumes inspired by the existing Rilakkuma lines coming out of Japan like the Heart Bath Series and the Which Color Do You Like? Series – super cool! AQI is the officially licensed manufacturer of Rilakkuma plushies in the US, and sells Rilakkuma products domestically, showing great potential for us US Rilakkuma fans to expand our collections.

So I actually had a short conversation with David Ringer, the CEO of AQI, a couple months ago regarding their plans for the US market – so look forward to a write-up that in the near future (after I get through a bit of my backlog of Rilakkuma plushies to post)! I was originally intending on waiting until I got my own AQI Rilakkuma plush to give a more complete report, but seems like a better idea to share the info now while AQI is on everyone’s mind following Rilakkuma Day!

I’ll work on finding an AQI Rilakkuma for myself soon – seems like medical school doesn’t leave me with much time to go out and shop anymore haha.

In other news, Simon’s got a new tablet, and has started quick-sketching some classic Rilakkuma plushie designs! 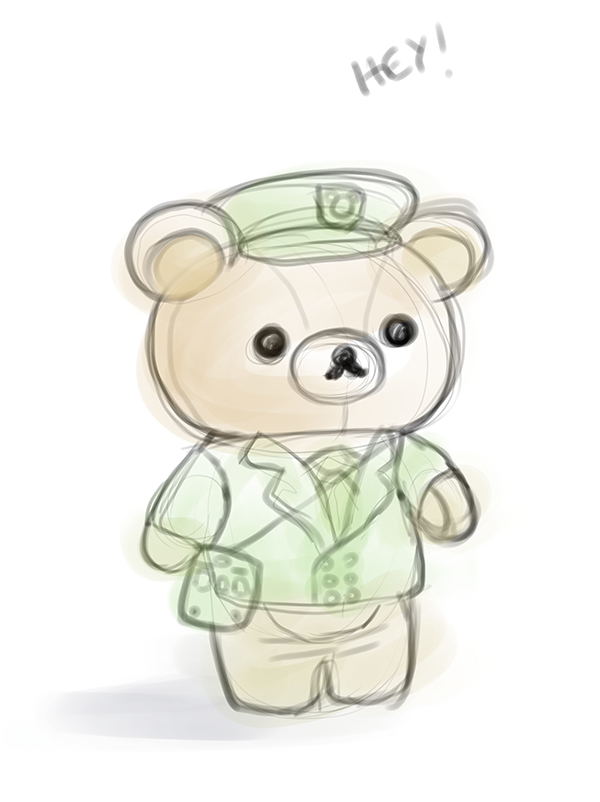 I love this art style a lot! What do you think?