Howdy – hope everyone is enjoying December so far! 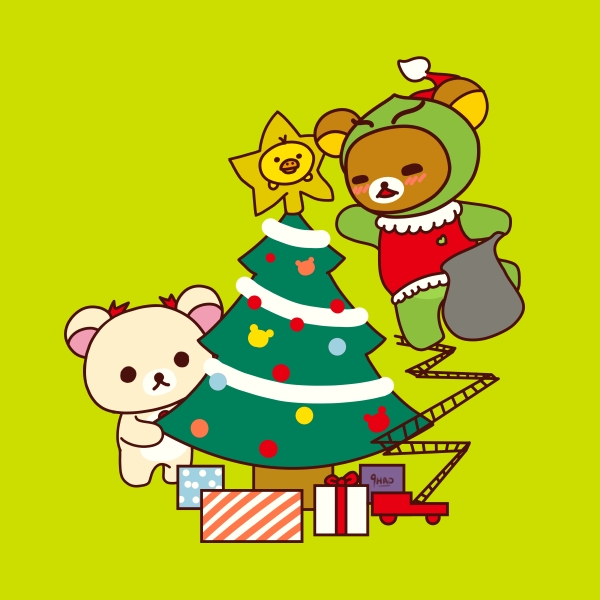 Rilakkuma as the Grinch, Korilakkuma as Cindy Lou Who, and Kiiroitori as the star!

This is based on a famous scene from the 1966 TV special How The Grinch Stole Christmas where Cindy Lou Who catches the Grinch stealing the star from the Christmas tree on Christmas Eve.

Here’s the famous scene, for your reference:

Hope you enjoyed this art project! In other Rilakkuma news, there’s always so many cute releases in the wintertime – here’s just a quick run through of a few that caught my eye!

Mister Donut x Rilakkuma Winter 2015: I absolutely love when Rilakkuma collaborates with Mister Donut, and this season is no exception! This year, the special items are a choice of 2 plates or a donut tree – wow, I think both of those are really great! Even though I’ve only had Mr. Donut food once in my life, I feel a really strong connection to this collaboration, it’s just too adorable! 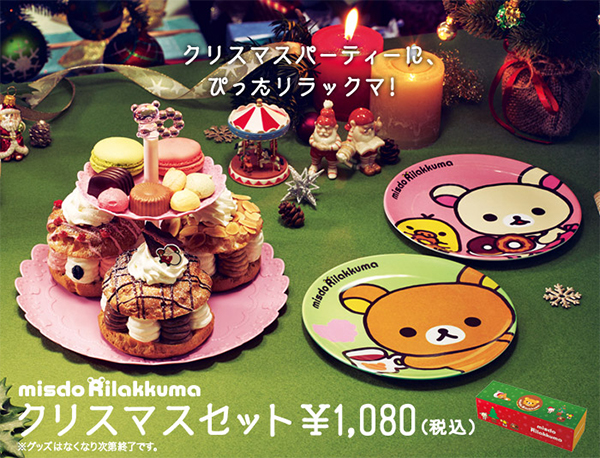 Whoa, that donut display tree makes me really wish I baked enough to display my food like that!

Year of the Monkey 2016: In preparation for the next zodiac cycle, this week, San-X welcomed the Rilakkuma Year of the Monkey plushies! Wow, these are super cute – I wish they would make a playset again like they did for the 2014 Year of the Horse release, I would get it in a heartbeat!

Rilakkuma and pals dressed as monkeys, holding wind-up monkeys and bananas! They even have little pink rumps hahaha. 1,900円 each.

New Years 2016 Playset: Um WOW I’m really blown away by the incredible detail in this piece! The content reminds me a lot of the Nabe (鍋) set from last year in terms of the detailing and individual ingredients, and the cover design is so similar to the Rilakkuma Store 5th Anniversary plush!

This design has Rilakkuma and pals as part of an osechi (御節料理), a traditional Japanese food to celebrate the new year! Each dish has a special meaning, such as the red sea bream Rilakkuma is holding, which represents an auspicious event. I really want to get this set – I just can’t take my eyes off this jaw-dropping level of detail and design! 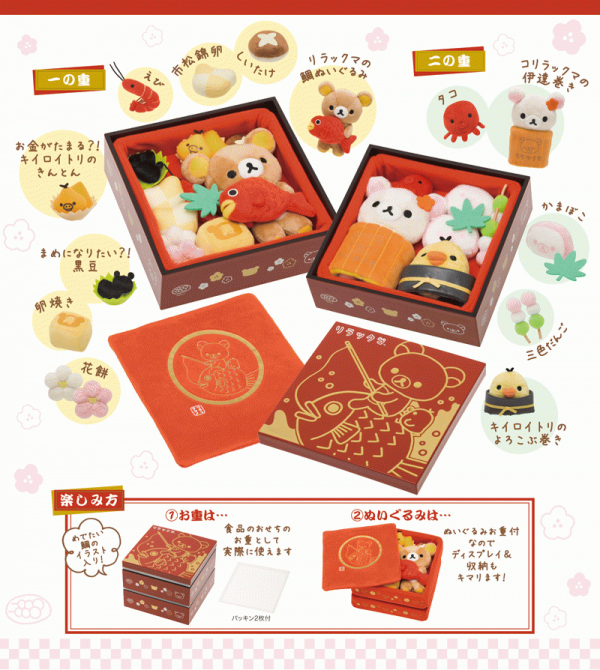 Christmas 2015: This year’s Christmas theme is poinsettias, and the title is “Shining Christmas Rilakkuma” – how beautiful! They join the Christmas 2015 Net Shop Exclusive stuffed set, which is themed as a cozy Christmas house. These wonderful designs were already released in early November, but since it’s the season, I thought they deserved the feature! One of the most elegant Christmas designs I’ve seen!

Beautiful poinsettia stoles for the standard release: 1,900円 each

The Rilakkuma Store exclusive playset features a Rilakkuma Santa team in their sleigh! Looks like the deer from last year’s Happy Natural time series are back again, hehehe. 12,000円 for the set.

And finally, one really cute addition to the lineup: a Rilakkuma Santa-themed headband! 1,850円 each.

What do you think? Any of these designs catching your eye? Personally, I’m super impressed this year!

In other news, I’m finishing up another rotation (obstetrics and gynecology) in two weeks – wow, time is really flying fast!

4 thoughts on “How Rilakkuma Stole Christmas!”