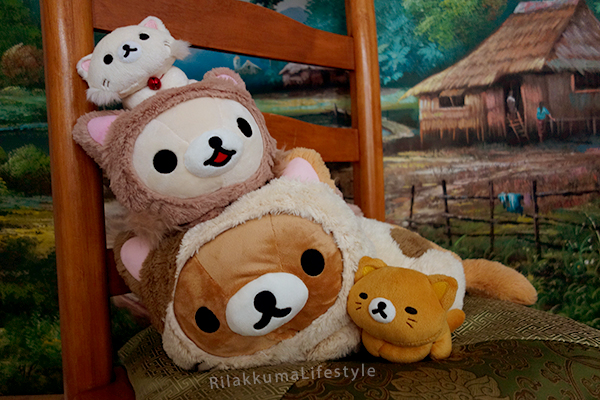 All together, they make a super cute Rilakkuma kitty tower! Their promotional page always has them side-by-side, but I love them as a tower too!

Rilakkuma’s brown kitten is a little sleepy! Though taken out of context haha I think he looks a little smug.

I love the paw pad detail! 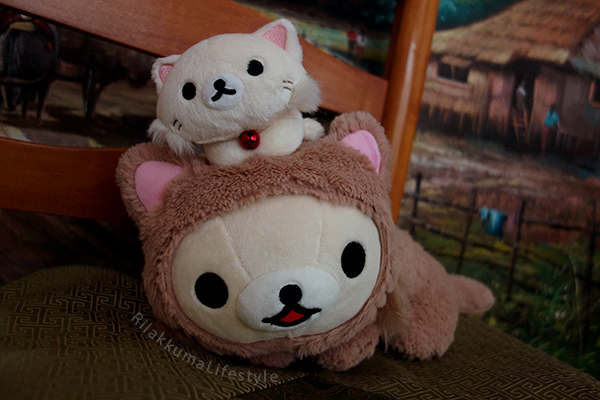 Korilakkuma dresses up as a brown cat, with her own white kitten!

Korilakkuma’s kitten has lovely fluffy whiskers just like she does!

Cute matching red bows on the back!

What I love most about this plush set is that they both fit snugly on one’s lap! This plush set was particularly exciting for my family because many of us are allergic to cats hahaha so this is as close as we can get to having cats of our own!

There are lots of great details like the bells on each of them, and the matching motifs: Rilakkuma/Korilakkuma and their respective kittens have matching whisker designs (two lines on each side for Rilakkuma, and generously fluffy ones for Korilakkuma), and Korilakkuma has a matching ribbon design with her kitten.

Also very interesting that Rilakkuma’s cat costume is that of a Calico cat, which are almost exclusively female due to a biological phenomenon called X-inactivation. The genetics behind their color patterning is really elegant, and I love that it’s represented in this Rilakkuma plush!

I preordered this cuddly set back in October 2015, so it’s great to see them after a long wait! These super cute cat-kumas were a Net Shop exclusive design released in the second iteration of the Rilakkuma Cats Series in October 2015.

Elsewhere in the Rilakkuma world, there are lots of cute new additions, here’s what I’m looking forward to:

Tokyo Station 7th Anniversary: On February 11, the Tokyo Station Rilakkuma Store celebrated their 7th anniversary with a New York themed Rilakkuma plush set! I think it’s very fitting because Tokyo definitely has the hustle and bustle feel just like NYC! I ordered the Rilakkuma from this series and can’t wait to see him – I love that his “I <3 NY” sign has a bear shape in the place of a heart!

Rilakkuma is front and center as the Statue of Liberty, and while I’m not sure what Korilakkuma and Kiiroitori are directly representing, they look like they’re ready to tour NYC! 1,580円 each.

Where would you like to see Rilakkuma and pals travel to next?

Introducing Koguma-chan (こぐまちゃん): In this new series called “Korilakkuma’s New Friend” (コリラックマと新しいお友達) to be released in March, Korilakkuma makes friends with a new little brown bear cub named Koguma-chan! I think this series and the marketing so far has been so great, though my favorite detail is Rilakkuma playing an ocarina in the middle of the woods while Korilakkuma is off making friends with new bears haha – I think personality-wise, it’s very fitting for each character. You can find an awesome translation of Koguma-chan’s story over at PescaMaryan’s blog! I ordered the medium Koguma-chan hehehe.

Lots of different sized Koguma-chan plushes for your interest, each with a cute yellow bear motif on his paws and back! Mini hanging plush: 900円, Small: 1,200円, Medium: 2,300円.

Of course, Rilakkuma and pals are in on the fun too, and they are all dressed up as Koguma-chan with their own yellow honey motifs! 1,900円 each.

As for new additions, my wonderful aunt Lulu was able to secure a Rilakkuma Osechi playset! Lots of new Rilakkuma to look forward to, I just hope my schedule allows me to post more often!

Outside of Rilakkuma news, I rang in 2016 on my pediatrics rotation! I just took my final exam in pediatrics yesterday, and will be starting my 3 month surgery rotation next week. My schedule just keeps getting busier and busier, but nothing like shelves stuffed full of Rilakkuma plush to help me relieve the stress!

What are your Valentine’s Day plans? Simon and I will be going to a restaurant called Soco for a dinner date – yum!