We were blasted with a summer sun last week, but now it’s been rainy and gloomy everyday! What happened? I guess now it’s just nap weather, which is fine by me hehehe. 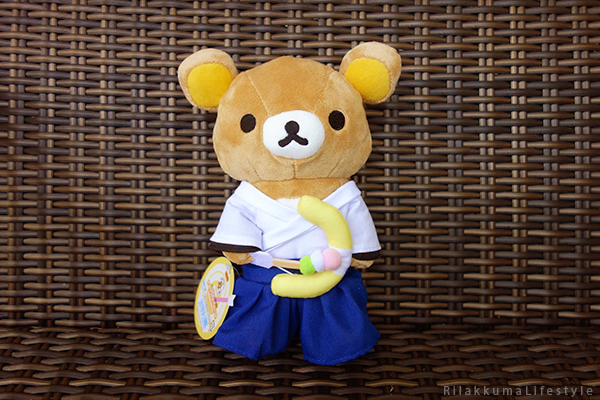 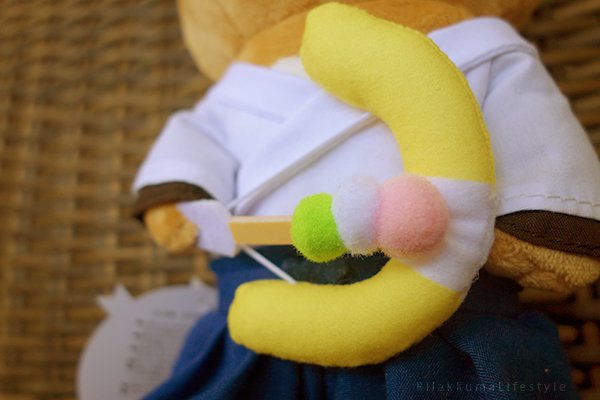 Rilakkuma draws a colorful dango arrow! And one of my favorite details of this plush: all kyūdō archers traditionally hold the bow with their left hand, and draw with their right hand, and Rilakkuma maintains this technique, albeit with paws.

A lovely yellow bear on the back of the uniform, a motif consistent with the other bears of this series. 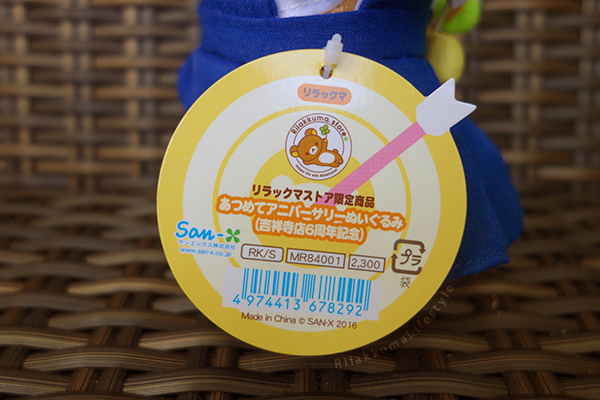 Tag art features a wonderful yellow and white target, with a bear symbol at the center. 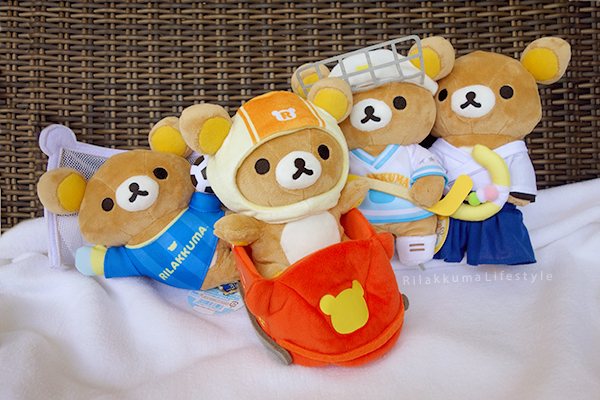 Bear Country athletes from 2016! Who will be next?

Right on target! This dango archer was released as part of the Kichijoji Rilakkuma Store’s 6th anniversary celebration, held in October 2016.

Kyūdō (弓道) is the Japanese martial art of archery that began in Japan long before recorded history. Rilakkuma is depicted here wearing a standard kyūdō uniform, proudly representing his nation’s athleticism and culture. I love how the sports theme for this anniversary cycle incorporates a wide range of sports from Japanese history from traditional to modern!

As this is not Rilakkuma first time as an archer, I love the contrast between this traditional kyūdō design and the elegant Sagittarius design from the 2013 Zodiac Series! I appreciate that these concepts are so distinct in both general feel and details, and it is great having two talented Rilakkuma archers here!

Major gratitude to my Aunt Lulu for adding this precision Rilakkuma to my collection—thank you!

Over in Rilakkuma-land, an awesome collaboration coming up: Deep Sea 2017 x Rilakkuma!

This summer, Rilakkuma is teaming up with the National Museum of Science in Tokyo for their special exhibition on deep sea life called Deep Sea 2017 (深海2017) which opens July 11!

Rilakkuma snuggles a giant squid! Kiiroitoi rides a suspiciously adorable anglerfish! And Korilakkuma… is riding a jellyfish? Any insight on what animal that is would be appreciated haha.

Wow, what an incredible collaboration! I adore the playful artwork and concept! I hope they make a Rilakkuma and giant squid plush hehehe.

The first live giant squid was photographed back in 2013, and in the 4 years since then, the world’s been fascinated with the mysteries of giant squid and its friends of the deep sea. This exhibition sounds like an absolute delight, and I love that Rilakkuma is part of it!

I absolutely love deep sea creatures! Have you seen Planet Earth? There is really some beautiful footage of deep sea life on their “Oceans Deep” episode!

Ever wanted to try Rilakkuma shaved ice? You can this summer in Japan!

Two of the current Rilakkuma collaboration cafes, auréole d’ange and Cafe Coconoha, will be introducing beautiful Rilakkuma and Korilakkuma shaved ice desserts starting June 20. Don’t they look tasty and refreshing for the summer?

My sister will be going to Japan next week, and hopefully will be able to share some photos and comments about her Rilakkuma adventures across Japan in a guest post series! Stay tuned!

What Rilakkuma food would you most like to see?

I’ve seen these cafes accomplish beautiful burgers and dainty waffles, but I’d really love to see a Rilakkuma ramen shop! Maybe with a ton of bear-shaped carrots and seaweed and Rilakkuma-molded tofu blocks, like the Nabe Rilakkuma plush playset. What about you?