Hope everyone had a wonderful Valentine’s Day! Hope it was full of bears, whether they were Rilakkuma bears or gummy bears hahaha.

Wow, it’s really been so long since I’ve posted! Medical school has really been a whirlwind lately: I’m almost done with my coursework for this year, and will be taking my first national board exam at the end of April!! Apologies for the spottiness in posting, but school comes first right now!

Rilakkuma for your daily life!

You can catch me on Instagram when I’m not posting here! Recently, I haven’t had long stretches of time where I could sit down for an hour or two to write these posts on WordPress, but do get a chance to snap a quick shot of some Rilakkumas from my collection for Instagram. Check it out!

In the meantime, whoa there’s been a lot going on in the Rilakkuma World! Let’s run through some highlights!

Super cute farmers for the standard release! 1,900円 each. 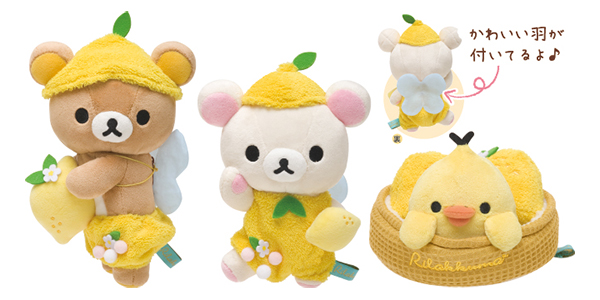 For the Rilakkuma Store Exclusive, Rilakkuma and Korilakkuma turn into… lemon/bee hybrids!? And Kiiroitori shapeshifts into a lemon hehehe. Love their poses! 1,780円 each.

Another Rilakkuma Store exclusive: lovely hanging charms featuring the whole team inside of lemons! 1,380円 each.

For Caravan: a sitting Rilakkuma with a lemon hat and a Kiiroitori lemon! 1,800円.

Wow, what an incredibly detailed line to ring in the spring season! The illustrations are beautiful as always, and I love the creativity they’ve brought into their designs! I absolutely love that they actually morphed Kiiroitori into a lemon shape for the Store Exclusive Series hehehe, and then completely transformed him into an entire lemon for the Caravan plushie! Kinda reminds me of those Animorphs book covers haha.

I think I’m going to pick up at least one of the plushies from this series, just haven’t decided yet! I use lemons enough in my daily eating and tea-drinking so I should probably get a Rilakkuma tribute for that hehe. 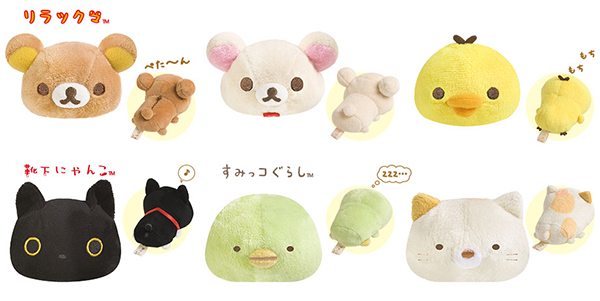 Plushies from all sorts of famous San-X lines! 600円 each. 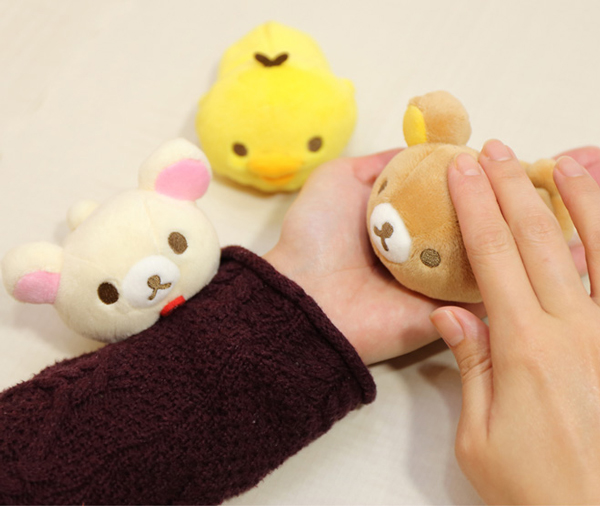 Wow!! Check out this ultra-cute photo taken by the San-X Net Shop!

Hahaha they remind me a lot of Disney Tsum Tsums! Really cute, and I love how round and squishable they look! I have a really big Winnie the Pooh Tsum Tsum so I’d really love to get a really big mochi Rilakkuma to match too – hope they come out with larger sizes soon!

What a lovely bouquet of hearts! Korilakkuma got all pink hearts hehehe. 1,780円 each.

These lovely plushies came out just in time for Valentine’s Day this year! I always love these holiday-themed sets, and I especially love the little “I love” tag attached to their fabric tag – such a romantic detail!

The whole crew looks super fashionable and ready to travel in style! What an appropriate design for Tokyo Station, since it’s such a travel hotspot! I have to admit, it was hard transitioning from the standard sized plushies they used to release for the store anniversaries, but since getting mini-plushies such as the plushies from the Vegetable Series, the JINS PC series, and the Factory Series I’ve really warmed up to this mini-style of Rilakkuma plush! 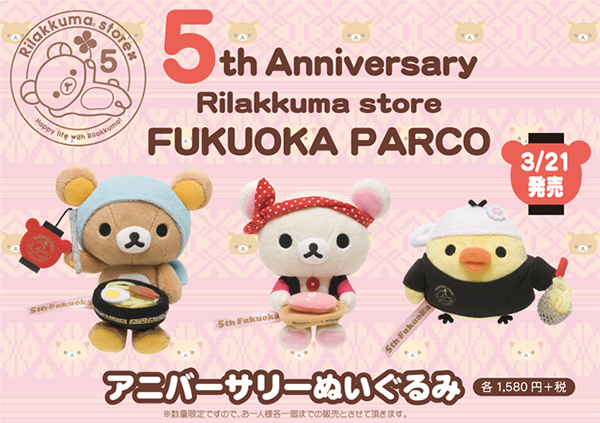 What a beautifully detailed anniversary series! This year’s Fukuoka anniversary series is mentaiko themed! Mentaiko (明太子) is marinated pollock and cod roe, and is the most popular souvenir from Fukuoka! It’s a popular complement to noodle dishes (like this Rilakkuma plush), with rice, or on its own (like Korilakkuma’s!). Perfect as this year’s anniversary plush!

I love learning about Japanese food and culture through Rilakkuma plushies! I might want to pick up the Rilakkuma from this line if I do well on my next exam – his noodle bowl looks delicious!!

So what do YOU think? Any of these bears catching your eye?