At long last, I’m proud to begin featuring Rilakkuma plush and products that are designed here in the US!

Aliquantum International (AQI) manages all of the Rilakkuma merchandising in North America, and with an official license from San-X in Japan, they are now producing their own Rilakkuma plush designs! Many are inspired by previous Rilakkuma designs, but the materials, patterns, and construction are unique to AQI! So consider these authentic American Rilakkumas ;) 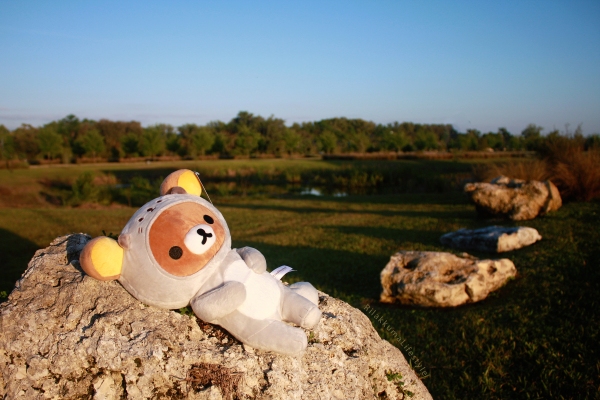 The otter hood has crisp, proportionate, and symmetric embroidery—and I love the little triangular otter ears! 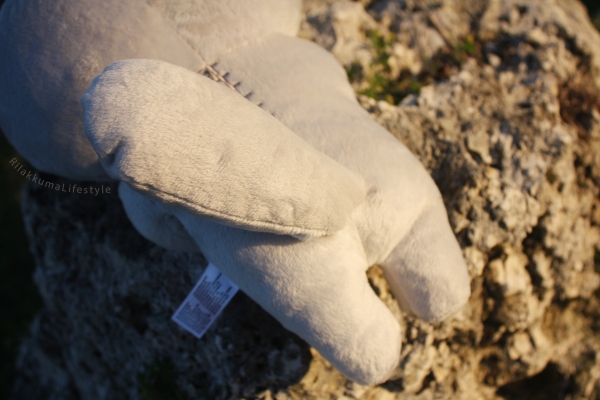 Side by side comparison of the North American AQI Sea Otter Rilakkuma (left) to the Japanese San-X Sea Otter Rilakkuma from 2016 (right)! Notable differences include the obvious size difference, texture of the suit (AQI with a smoother plush feel, and San-X with a fluffy terry cloth feel), and the presence of yellow scallop shell. Otherwise, many of the details I love the most are similar!

Wow, I’m super impressed—excellent quality and cute proportions! And I think this is a hilariously fitting cross-over design as otters are indigenous to Japan and North America. The otter series is one of my favorites, and I’m overjoyed to see a version now available here in the US!

This lovely otter and his friends are available at a Books A Million, Hot Topic, and IT’SUGAR retailer near you! And you can buy online at Hot Topic and IT’SUGAR while supplies last.

I LOVE these medium-sized Rilakkuma plush that tend to be the standard sizing for the AQI Rilakkumas (very big and huggable), though I will say it will make me run out of shelf space faster hahaha.

I really appreciate that us Rilakkuma fans in the US now have local options! The North American AQI Rilakkumas are crafting their own identity that pays homage to their Japanese counterparts while also bringing something new to the table. I’m really excited to see how their products evolve in the future! Can’t wait to see some USA specific ones hehehe.

So what do you think of this otter Rilakkuma? What do you want to see in the future for AQI Rilakkumas?

Welcome to the family, Koguma-chan!

What I really love about Koguma-chan’s plush design are the details that make him a unique character, but also one that jives well with the crew. Instead of a belly spot, Koguma-chan has a tuft of white fur. His white snout is taller, with a raised nose, and a mouth that doesn’t flare out as much as the others. Instead of being embroidered, his eyes are solid raised plastic. 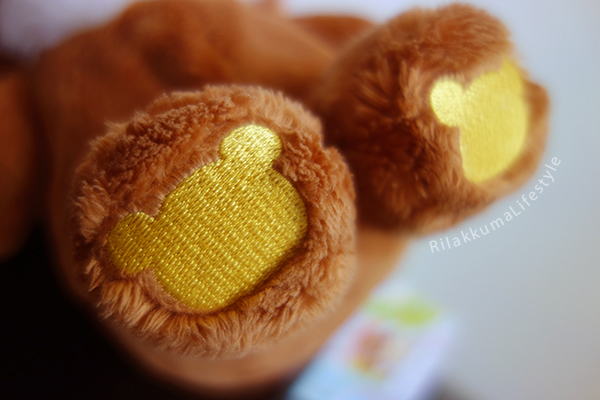 One of my favorite Koguma-chan details are the honey, bear-shaped, embroidered foot pads! He does not have upper paw pads like Rilakkuma/Korilakkuma.

Like Rilakkuma’s zipper and Korilakkuma’s red button, Koguma-chan has a unique motif, too: a bear-shaped honey mark on his left bun!

Tag art: doesn’t seem to be the most fitting for a standard Koguma-chan plush without honey pot or Korilakkuma, but super cute regardless.

Koguma-chan (こぐまちゃん) was introduced in this spring’s series called “Korilakkuma’s New Friend” (コリラックマと新しいお友達), which was released this past March. Above is the M (medium) standard design, which I think is super adorable! “Koguma” (こぐま) means bear cub, and this bear cub loves honey!

I was also super lucky to get my hands on this Rilakkuma Store Exclusive Fishing design too, thanks to Brenda at Kawaiikkuma-shoppu.tumblr.com! 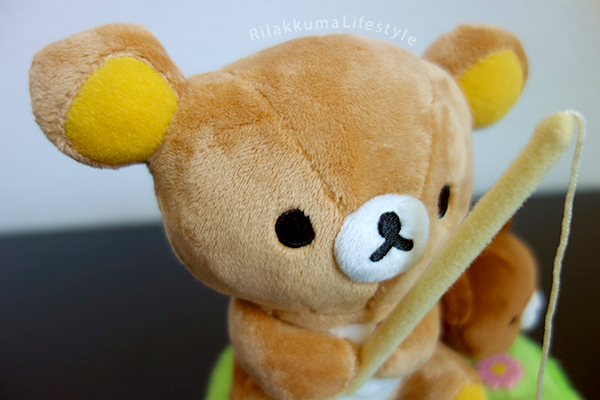 This is actually my second fishing Rilakkuma! My first is from the Rilakkuma Store 5th Anniversary series.

Catch of the day! Plus, a little peek at the pink flower details. 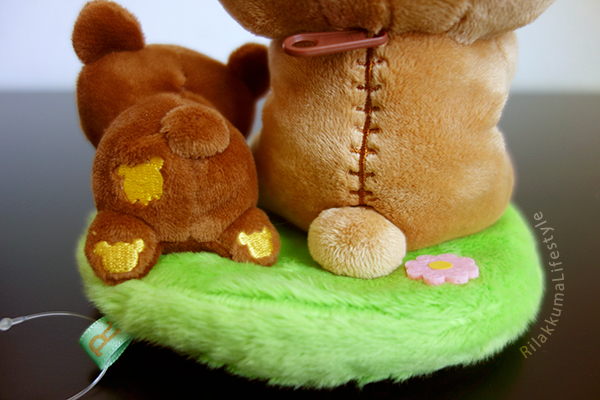 Keeping the pattern of inconsistent tag art: the famous ocarina scene featuring zero fishing. You can peep the illustration that inspired this plush design over at the official San-X Rilakkuma blog.

This Rilakkuma plush was released as one out of three Rilakkuma Store exclusive designs from this series, featuring Koguma-chan interacting with Rilakkuma, Korilakkuma, and Kiiroitori.

I’ve been holding onto these two cuties for a few weeks now, and I’m so glad I can share them both with you now! I’m thinking of ordering one of the ocarina Rilakkuma bears, either the Caravan design or the Net Shop Exclusive design. I’m leaning towards the Caravan design for its mobility right now, but we’ll see (also I’m running out of shelf space!!).

Koguma-chan is really shaking things up in the Rilakkuma world, and I can’t wait to see where he shows up next!! Is the Rilakkuma crew going to be expanding to four members soon, or will Koguma-chan be more of a bit player?

What about you, were you able to snag a Koguma-chan for yourself?

Gearing up for summer, San-X has a big release coming up, the Sea Otters Series!

Cute and relaxed for summer, with snacks in tow!

RIlakkuma and Korilakkuma swim on their backs, heads tilted to the side. Rilakkuma Store Exclusive: 1,700円 each.

Personally, I really love this design – I’m usually not as enthusiastic about Rilakkuma’s animal designs compared to the complex/conceptual (or food) designs, but I do think this series captures the spirit of Rilakkuma in the summertime really well! What a great series to ring in these warmer months :) Totally reminds me of one of my favorite YouTube videos, Otters Holding Hands from the Vancouver Aquarium.

This aggressively adorable series will be hitting shelves this May – which designs are you eyeing?

I think I’ll aim for either the standard Rilakkuma otter, or the Store Exclusive Rilakkuma otter who faces the side. I might wait to see the other exclusives (Net Shop, Caravan, Lawson) before committing though (I’m attempting to show restraint haha).

I’m having a tough time figuring out what Kiiroitori is trying to be, looks like a fish in some designs, but then a jellyfish in the standard plush design, if anyone can enlighten me, that would be excellent.

Also, I’ve noticed that San-X has begun releasing multiple Store Exclusive designs starting with the Korilakkuma’s New Friend Series, which is pretty nice! I love having a wide variety of designs to choose from, though I suppose it makes collecting an entire series a little more expensive haha.

Elsewhere in the Rilakkuma world, Rilakkuma and friends have been traveling all over in their Anniversary World Tour! Since I posted about the Tokyo Station release, the Kuma Krew has since been to Africa (Fukuoka), the United Kingdom (Lalaport Fujimi), and France (Kobe)!

The next stop for Tokyo Skytree’s 4th Anniversary is Austria!

Rilakkuma and Kiiroitori flex their musical talents! Korilakkuma tries her paws at policing. 1680円 each.

You can pick up this musically-inclined set at the Tokyo Skytreetown Solamachi Rilakkuma Store on May 21, and go meet Composer Rilakkuma, too hehehe.

Austria has produced a lot of famous composers, including Mozart, Hadyn, and Schubert. Rilakkuma and Kiiroitori in this series looks like they’re based on Wolfgang Amadeus Mozart himself, who was one of the most prolific and influential composers of the Classical era. Born in Salzburg, Austria, he was known to be a musical prodigy, able to play the piano and violin by the age of five, which is beautifully represented in this Rilakkuma anniversary design as Rilakkuma and Kiiroitori’s instruments of choice.

Have to admit, I do love this anniversary theme a ton! It’s great to see the wanderlust side of Rilakkuma! I picked up the Tokyo Station 7th Anniversary NYC Rilakkuma, and will share those photos with you on the next post – look forward to it!

In other news, I’m deep into my surgery rotation which hopefully explains a little bit of my absence (sorry!) – I’m on the colorectal surgery service right now and learning a lot! I have 3 more weeks to go, and then I take 2 board exams, and officially become a fourth year medical student in June – woohoo!

Lots of hard work ahead, but won’t be a problem with Rilakkuma by my side!