Hey really quick update on the anniversary plushies: turns out the fishing Rilakkuma/Kiiroitori is just to commemorate the 5th birthday of the Rilakkuma Stores in general, which is why it falls on Umeda’s anniversary (the oldest store) but can be purchased at all 8 Rilakkuma Stores across Japan on September 14.

Meanwhile, Umeda gets its own store-specific 5th anniversary plush too!

So basically there will be two “birthday” plushies at the Umeda Rilakkuma Store on September 14: the Rilakkuma riding the fish AND the 5th anniversary set with all 3 of the Rilakkuma crew: Rilakkuma, Korilakkuma, and Kiiroitori. You can also get special Rilakkuma event medals at Umeda and Tokyo Station!

Chestnuts are known as a symbol of autumn in Japan, and are used in seasonal dishes such as Kurigohan (栗ご飯, Chestnut Rice).

You can even find chestnuts in Japanese folktales, proverbs, and nursery rhymes such as “The Crab and the Monkey” (さるかに合戦, saru kani gassen) – a short story where a crab is killed by a monkey, and the crabs kids and friends (one is a chestnut) seek justice.

Probably more on chestnuts than you cared to know about, but it’s nice to know the cultural context of these plushies. My family had a package of roast chestnuts while we were in Japan, they sell them right on the street – pretty convenient!

I’m still not sure super what Kiiroitori’s costume is supposed to be, so if anyone could enlighten me, that would be great haha he kinda just looks like a lion to me. (UPDATE: WOW, apparently Kii is a raw chestnut!! Thanks so much, Ariel!)

So pretty cool: so far this year, Sapporo’s theme is the harvest moon, the 5th Anniversary for all stores is the red sea bream, and Umeda’s is chestnuts!

Anyway, that’s it for me today – more photos of plushies to come as I finish studying about cholesterol and HDL, LDL, and VDL haha.

Wow, things have really gotten hectic in the Rilakkuma world in the past two days!

Here’s a quick run-down of what’s going on:

They’re in a fruit pie! 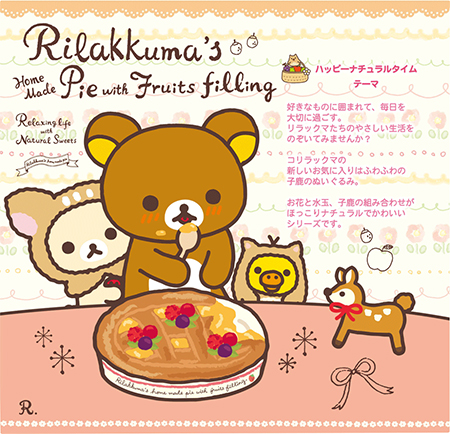 I really want more details to be released about this whole series! Also a shorter official series name maybe hahaha.

Right now, we can get ourselves ready for the Lawson x Rilakkuma collaboration for this series – details on the date to be released soon, but in the past I’ve ordered Lawson Rilakkuma goods online and of course, those in Japan can use the Loppi system at Lawson to order in person. This set will be 3990円.

The design for the standard size plushies have been leaked (they’re deer), but I’m kinda torn because I want to wait and see what the other designs will be (Caravan, Store Exclusives, Net Shop Exclusive, etc.), but this Lawson plush pre-order might end before I get a chance to decide.

Also, I don’t know how deer relate to pies but I’ll take it hahaha

Didn’t know Rilakkuma was such a good fisherman!

The red sea bream has a special place in Japanese culture, and are symbols of good fortune. How auspicious to have Rilakkuma riding one for the celebration of the oldest Rilakkuma Store’s birthday!

I think I want to get this one! I kind of want to hang it on my car’s rearview mirror, but I wouldn’t want it to get sun-damaged either, hmm…

I wonder if there will be a happy birthday message printed somewhere like we saw in the past year’s store anniversary plushies (example)?

This plushie (looks like it’s on a string) will be available for 1600円 at all of the Rilakkuma Stores, but not online.

This is the first time we’ve seen a Halloween playset in a while!

Like previous Halloween releases, you can buy these at one of the 8 Rilakkuma Stores in Japan, select carrier stores, and the Net Shop. The individual plushies are 1680円, and the playset is 15,000円 (wow). If you go directly to a Rilakkuma Store, they will have special edition drawstring treat bags, too!

Also coming out on September 7 is Sapporo’s Anniversary plushie for 2013!

Like the Umeda anniversary plushie, this set is also deeply tied to Japanese tradition! Because Sapporo’s Anniversary is quite close to the harvest moon for this year, these plushies are Tsukimi (月見) themed! Tsukimi, literally translated to “moon viewing”, are Japanese festivals honoring the harvest moon. Traditional offerings include dango and susuki grass, which Rilakkuma and Korilakkuma are holding. Not sure what’s in Korilakkuma’s left paw (if anyone knows, please let me know), but seasonal produce are also offered during Tsukimi as well!

In my family’s tradition, we play this wild mooncake dice game for the harvest moon – super fun! My sister won the jackpot prize last year!

Though I loved the food anniversary plushies from the past year, seeing these new ones that are so linked Japanese culture and tradition is really great!

Their little pink tags/ribbons say “2nd Sapporo” on them!

Unlike the Umeda plushie, this one is only available at the Sapporo Rilakkuma Store, and the plushies are 1300円 each.

I know I kinda posted about this set already, but it’s worth mentioning again just to represent how many different things have been announced in the past 48 hours!

I really love this batch’s set of instruments: keyboard, piano, drum, bass violin, trumpet, accordion, and saxophone – what a mix!

As a Net Shop exclusive, you can only buy this online at the Net Shop for 17,500円 – the priciest I’ve seen at retail yet!

Whew, that’s about it for now! I think I got used to the slow Rilakkuma news and now I feel overwhelmed haha.