This mint chocolate chip ice cream Rilakkuma was released in September 2012 to celebrate the Sapporo Rilakkuma Store’s 1st anniversary – even the tag is ice cream shaped! Breathtaking details as always, down to the tiny chocolate sprinkles all over the hood and the little mint leaves at the top. The back of the hood also has a celebration message (Happy 1st Birthday! Sapporo.) embroidered in gold! Luckily, I know a bunch of places selling them, but for now I’m going to restrain myself from splurging since I’ve been on a Rilakkuma shopping spree for the past few months already. 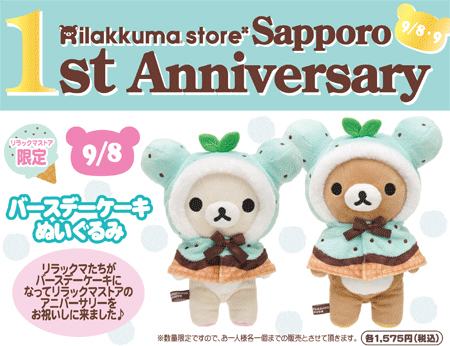 In general, all of the special store anniversary releases in 2012 were super cute, from Kichijoji’s 2nd Anniversary strawberry cake plushies to Umeda’s 4th anniversary chocolate pudding plushies. I would love to have any of them, but I’ve got my eye out for the Sapporo version because he’s a combination of my favorite ice cream flavor and my favorite Rilakkuma clothing item, the poncho!