San-X has announced that they will be releasing a new Rilakkuma series called “Let’s Play With Rabbits!” in December 2012:

They look like Energizer bunnies! Looks like Rilakkuma even gets a little front pocket! The new rabbit ears aren’t too much longer than their existing ears, so it kinda seems like they’re just wearing fuzzy pink pajamas. The animal costumes are always super cute, but when have we seen Rilakkuma as a bunny before?

Year of the Rabbit Series 2011

Bunnies Series Rilakkuma with removable suit released December 2010. Also, this series has a strawberry motif, and this Rilakkuma has a little embroidered strawberry on his butt hahaha. 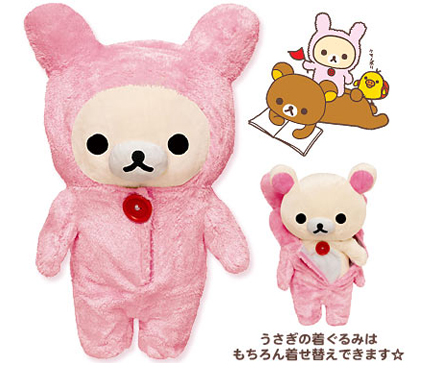 Korilakkuma has worn another pink bunny costume before back in 2007!

So many bunnies! No complaints here though – these new rabbit plushies look super soft, and San-X always seems to continually improve in quality! The newest edition looks a little fluffier than the previous versions. It’ll be lovely to see these new bunny plushies when they hit the market!