Working through my Japan haul slowly but surely…

His lovely apron with the Rilakkuma Store logo!

He’s even got a leather tag hanging from his zipper! Also, you can see that his apron is lined with a nice brown and white polka dot fabric from this angle, too!

He was a Rilakkuma Store exclusive first released way back in September of 2009! He holds a special place in my heart because he reminds me of all my adventures in Japan, running around finding Rilakkuma Stores :D

Continuing the second half post theme of “Rilakkuma products my dad bought”, check out this Rilakkuma riding a banana!

Bananas are my dad’s favorite food! 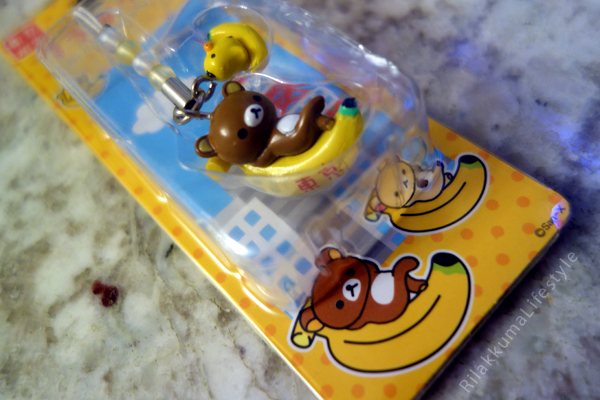 I wish I had plushie version of this!

I guess Tokyo is known for their bananas?

The only thing I could really find out about bananas is Tokyo is the company Tokyo Banana (東京ばな奈), which makes tasty banana cream-filled sponge cakes.

My family bought a few while we were in Tokyo. They’re pretty good, and apparently they’re the #1 best-selling souvenir! Is this Rilakkuma really referring to this banana cream cake company? Googling “tokyo” + “banana” and there are just pages and pages about this company alone!

It’s a really cute concept: the regular banana cream only ones are a solid yellow, and they use animal print to represent additional flavors. This giraffe-print one is filled with banana caramel custard cream! There’s also leopard spots (chocolate), and tabby cat stripes (caramel).

Anyway, I also found out there are banana vending machines around Tokyo, so maybe that has something to do with it, too haha.

In other news, I’ve been playing that daily Rilakkuma raffle that Ariel posted about earlier and won another background, Rilakkuma Meets Honey theme this time! I think I’ll play every day haha