Here are the miscellaneous Rilakkuma things from the big, recent influx that didn’t quite fit in with the other posts but deserve a mention:

A Rilakkuma cell phone holder, Korilakkuma mug and plushie (most of these are my sister’s).

The blue envelope on the left and the Kiiroitori folder on the right came together, and were a gift to my sister from her generous Japanese friend: they’re part of an ongoing campaign celebrating a whole decade of Rilakkuma!

Each blue envelope has a mini-folder featuring a different Rilakkuma series inside – my sister lucked out and got a great throwback to a series that debuted in August 2005 that was centered around Kiiroitori’s life and activities! Old school Rilakkuma! Looks like Kiiroitori got stuck cleaning up after Rilakkuma’s mess though…

A Korilakkuma mug for Simon! The little tail in the back is so cute, but I think it’s kinda funny that Korilakkuma products with this theme are always just labeled “Rilakkuma” haha 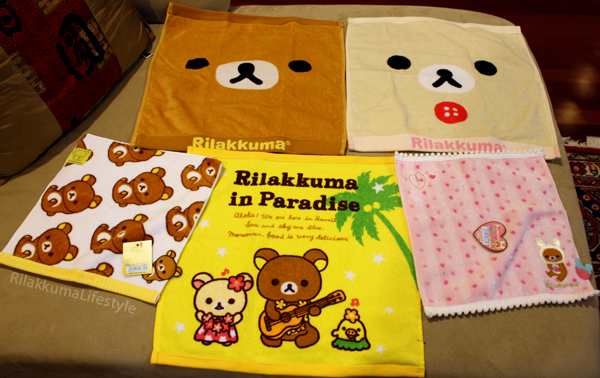 Whew! All kuma-ed out for the time being.

My sister’s in town for her spring break, and one of her Japanese friends (the same one who gifted us the Rilakkuma furikake before, actually!) gave her some Aloha Rilakkuma swag!

Curiously, I haven’t made a Rilakkuma purchase in over two months, but Rilakkuma stuff always finds its way into my life hahaha 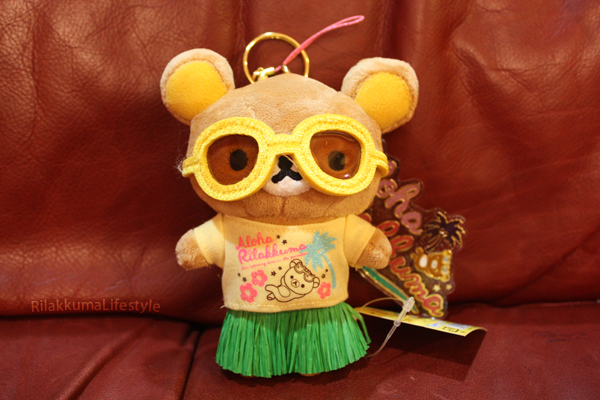 Keychain plushie! Just a miniature version of the 22 cm plushie, but without the plush palm tree.
The grass skirt has a realistic, crisp texture, and even the screen printing on the t-shirt is quite well-defined. 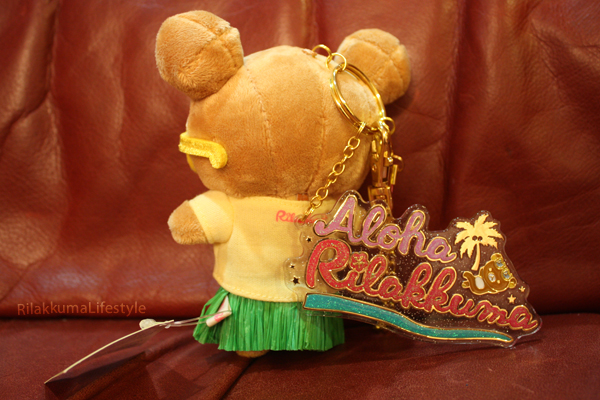 Unlike the bigger plushie, his sunglasses don’t have a band that goes all the way around.
And that charm is just as tall as Rilakkuma!

While I personally have no need for a pencil case, my sister is in college, so she’ll get a lot of mileage out of this!
Minor detail, but I really like how the sequined “Rilakkuma” is under a smooth plastic finish so the sequin edges don’t bend and catch on things.

The Aloha Rilakkuma Series is ongoing, and began in February 2013. This line is pretty major, with new Caravan designs, store exclusives, and collaborations rolling out week after week!

Speaking of which – do I spy a new San-X Net Shop exclusive??

Rilakkuma wearing the yellow lei and playing the ukulele is in a lot of the promotional illustrations – I was wondering if/when they’d make a plushie of it!

May turn out to be a wider release, but I only saw this design announced on the San-X Net Shop Facebook page tonight and not on any other official Rilakkuma page as of me writing this post, so we’ll see where this guy will be available!

I originally wasn’t planning on purchasing any of the Aloha Rilakkuma series (mainly because the Zodiac order took a chunk out of my Rilakkuma budget), but I definitely want to order the new Lawson Aloha Rilakkuma plushie!

Check out these great details! 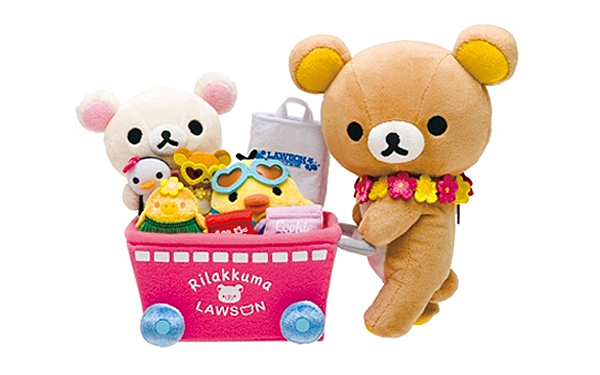 Rilakkuma comes with removable lei! The shopping cart is attached though. He looks pretty sassy haha

Looks like Kiiroitori’s holding the money! Korilakkuma’s brought along her penguin and… her very own Aloha Rilakkuma plushie?

Lawson shopping bag, and a Kiiroitori shaped bottle of honey! 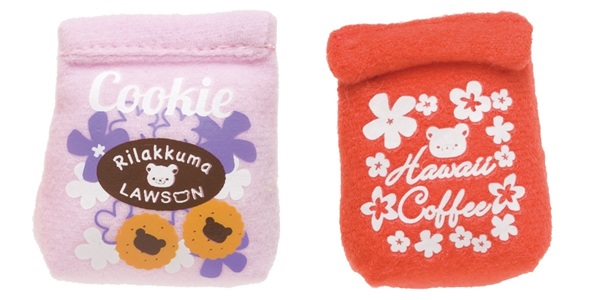 One of my favorite details: Rilakkuma cookies and coffee!

This super cute set will be released in late June (the 20th) – though pre-orders will be taken from now to April 15. I am looking forward to this release very much!

In other news, I’m presenting at ECAASU this weekend! Been hard at work preparing slides and speeches, so I may be MIA for bit. It’s been really fun preparing for this presentation because half of it is about Rilakkuma/San-X hahaha – the best kind of work!

They’ll only be sold at a special birthday event at the Tokyo Station Rilakkuma Store this February.

They look so snug and yummy! 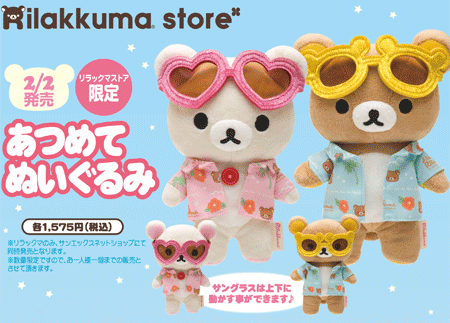 I want a pair of Rilakkuma-shaped sunglasses too!

Wah, so many new releases!

Can’t decide if I’ll order any of these for sure since San-X releases these new series faster than my wallet grows, but we’ll see!

So San-X announced the Rilakkuma Hawaii Series a few weeks back, which is set to be released in February 2013.

Ready for the beach!

Because it was announced before I even started this blog (!), I wasn’t originally planning on making a post about them until their official release, but San-X just announced that they’ve teamed up with H.I.S., a Japanese travel agency, to offer a special Rilakkuma-themed Hawaiian vacation! You get a Rilakkuma travel tote filled with gifts, and the room is fitted with Rilakkuma plushies everywhere! 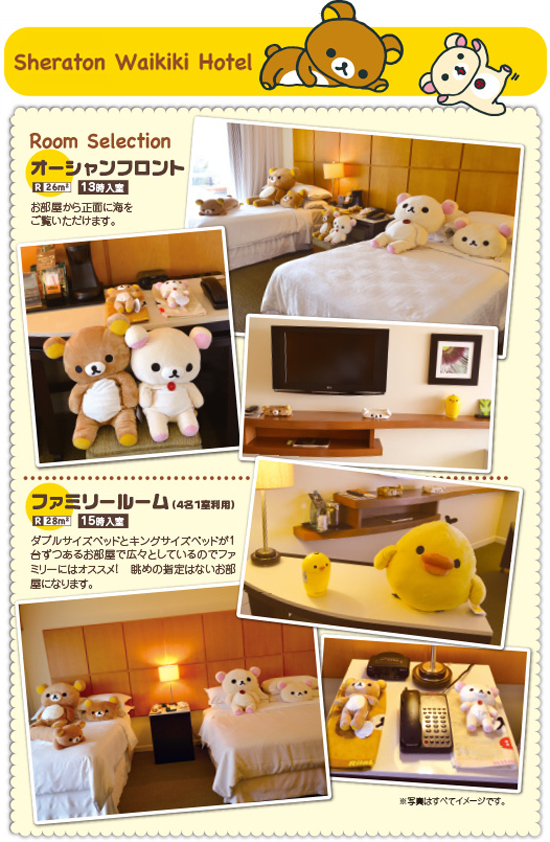