Thinking about the donuts from yesterday made me hungry! Here’s a plush I’ve recently been yearning for: the Mister Donut (Misdo) Rilakkuma! From my understanding, during the course of this campaign, you would receive a scratchcard with a Misdo donut purchase of more than 100円, and this plushie was a gold level prize. 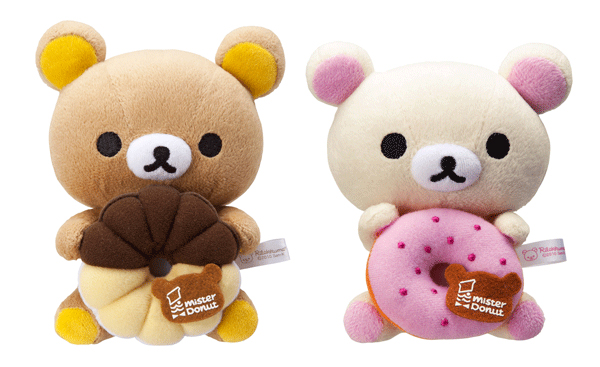 Rilakkuma partnered with Mister Donut during Winter 2010, where they gave out a ton of other merchandise with donut purchases like tote bags, squish toys, and even a special Christmas set!

History lesson: Mister Donut was established in the 1950’s in the US, but after being acquired by Allied-Lyons, most stores in North America were converted into Dunkin’ Donuts (Donutses? Donuts’?). However, the franchise kept its name in Asia (after being acquired by Duskin), and it’s now the largest donut chain in Japan! No wonder Rilakkuma likes them so much!

Anyway – I wrote and queued this post up around last week, and yesterday, Simon ordered him for me!! I’ll post pictures as soon as he arrives! YAY!