They’re supposed to be little floats in a parade celebrating Rilakkuma’s 10 year anniversary :)

Looks like Rilakkuma is singing into a dango microphone on a bear-shaped cake-themed stage with a full band, Korilakkuma’s in a pink castle (with goat and bunny Koris peeking out), and Kiiroitori’s in a birdcage (lol) with other little Kiiroitoris. Love how each float also has little wheels so it looks like they’re actual parade floats! And they have crowns like they’re royalty hahaha

This incredible set will be released as a store exclusive on July 13th!

(ETA 6/17: the San-X Net Shop says they’ll be stocking them too! Haha, too bad I missed that – definitely wouldn’t have pre-ordered from a seller if I knew!)

12,000 yen (~$124 USD) for the entire playset, I believe :O A little steeper than we’ve come to expect from exclusive playsets (the Aloha Rilakkuma Net Shop Exclusive was 10,500 yen), but worth the price for the level of detail, in my opinion!

Will you be getting these? I think I’m gonna go for them (but what’s new haha).

ETA: Here’s campaign page for the Rilakkuma special editions, including the ones riding horses!

I have to admit, when the Rilakkuma Wonderland series was first announced (or leaked I should say haha), I wasn’t the most excited about it for some reason – I didn’t even make a big post about it like I usually do. It was probably because I have bad memories associated with being in the marching band in middle school haha (old uniforms, absentee teachers, trying to avoid horse poop during a parade, ick).

But as more news about this kept rolling in, I got more and more excited – especially when San-X redesigned the Rilakkuma website and premiered a new flash animation – and with this new playset, I’m happy to say that I’ve jumped the fence and I’m a big fan of this series now and can’t wait for it to be released! 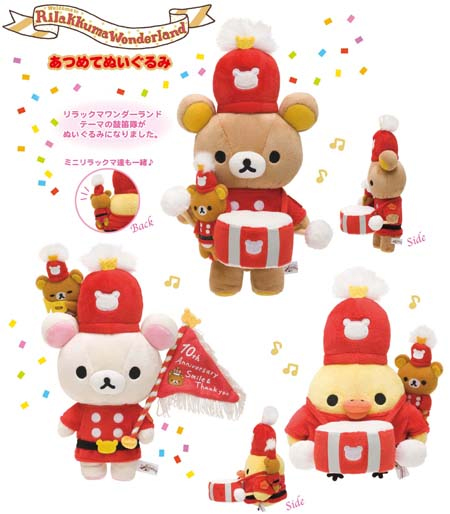 A drum (and one tiiiiny bugle) corp! Kori’s flag says “Smile & Thank you”

Looks like they each have tiny Rilakkumas on their shoulder?? Hahaha I wonder why.

They’re also to be released on July 13, and they’ll be a cool 1,600 yen each. They will be exclusive to Rilakkuma Stores, but from what I understand, the San-X Net Shop will be stocking Rilakkumas-only like they did before for the Aloha Rilakkuma store exclusive (I wonder why they do this…).

They’re super adorable though, but I’ll have check with my old friend Mr. Wallet to see if I can afford them when the time rolls around.

Wowww, the Rilakkuma plushie designers at San-X must be working overtime!