Is it summer yet? Hahaha it certainly feels like it here in Florida – the weather is really heating up, and I’ve exchanged long pants and jackets for shorts and tank tops!

That makes it a perfect day to introduce Fansclub Aloha Rilakkuma! 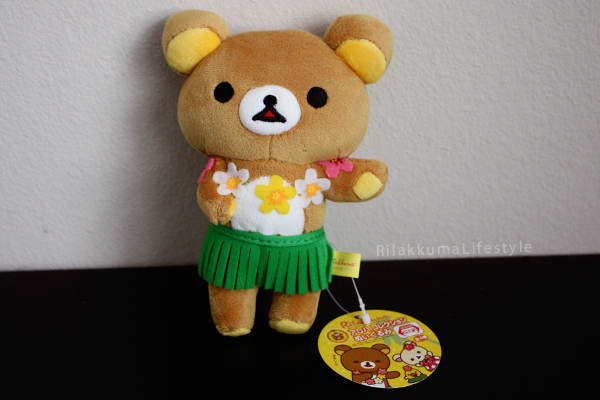 What an adorable hula dancer!

Check out his flower lei!

Doesn’t he look happy with all of his Aloha Rilakkuma family? So relaxed!

I do love this series a lot because it shows Rilakkuma doing so many activities: grocery shopping, hula dancing, surfing, and even sun tanning!

This adorable hula-dancing Rilakkuma was released by Fansclub in April 2013, during the height of the Aloha Rilakkuma release! He really gets me in the mood for sunny skies and warm weather :)

Thank you so much again and again to Trinie, for sharing this beautiful and relaxing Aloha Rilakkuma with me – he really fits in so well with the all of the other Aloha bears! :D

In other news, there are a few new things in the Rilakkuma world, like the Stripes Stripes Everyday Series Caravan plushie! 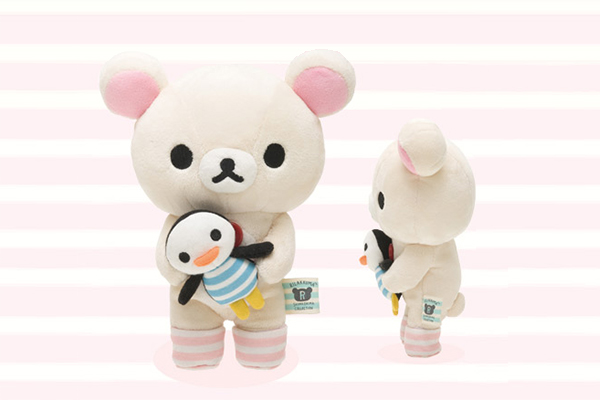 Striped booties and a striped penguin!

Penguin Rilakkuma and Polar Bear Korilakkuma will be at the Caravan holding Penguin Kiiroitori and a striped bear of their own! (I don’t think I’ve seen Korilakkuma wearing shorts before!)

How cute, a Korilakkuma caravan plushie! So nice to see the other members of the Rilakkuma crew getting some attention!

Simon, our resident Rilakkuma artist, really loves the little plush striped bear that appears in this series – I think he wants one just like the one featured in the caravan (bottom left corner), but I don’t think they’re for sale haha. I do like those Rilakkuma proportions for a maybe Craftholic-inspired bear hehehe.

And I’m also happy to share that another iteration of the Enherb x Rilakkuma collaboration was just released for this spring!

Herbal tea can be perfect even when it’s sunny and hot out!

What a great selection of springtime flavors!

I love this collaboration! The strawberry rose honey looks really yummy, and I always love the illustrations that are paired with the teas :)

That’s all for now – off to study antibiotics! I hope everyone is enjoying the season!

Kiiroitori rides along in the back!

He kinda looks like a Christmas ornament, doesn’t he?

Oh my gosh, I pre-ordered him way back in September and just received him this weekend because I was waiting for the Happy Natural Time Series Caravan design to be announced for the longest time. Ah well, he is definitely worth the wait!

Rilakkuma and Kiiroitori are riding a big red sea bream (鯛, tai), a symbol of good fortune in Japanese culture. There’s also a Japanese proverb “腐っても鯛” (Kusattemo tai) which roughly translates to “No matter how spoiled/old, it’s still sea bream” because even when sea bream isn’t very fresh, its flavor lasts longer than most other fish so it’s still good to eat (turns out that the fish produces a substance, inosinic acid, that decomposes slower than most fish and helps it resist spoiling!). Following, this proverb reflects how even in dire circumstances or old age, a person of quality still has their worth.

Hopefully this Rilakkuma and sea bream will give me some good luck for my upcoming medical school years!

In other news, the Rilakkuma x Enherb collaboration is gearing up again!

I love their ad this year!

Looks like they’ve extended their product line since last year with some honey/herb mix and bath salts, which is great to see!

The Enherb collab is close to my heart because (1) I love tea and (2) it was one of my very first posts on my blog!

Speaking of flashbacks to old loves, how CUTE is this new ad for the new Sumikko Gurashi tableware line?

Too cute to eat?

Appropriately, Tonkatsu is positioned at the very end of the cutlet hahaha

So amazing to see San-X developing Sumikko Gurashi! My sister has the mini plush like the one in the photo, and we both have the larger/regular sized one too!

Tonkatsu has always been my favorite, and like Enherb, was also the subject of one of my blog’s earliest posts :D

Speaking of which, Rilakkuma Lifestyle’s 1 year anniversary is coming up on the 21st – wow, I can’t believe it’s been a year already!

It’s been getting mildly chilly here (not objectively cold – it’s just Florida), so I was thinking about drinking hot tea regularly again.

As if on cue, San-X recently announced a new collaboration they have with Enherb for the holiday season. Enherb is an herb company that uses time-tested recipes and techniques to craft their soothing teas, fragrances, and skincare products. Their philosophy is that using the finest herbs regularly and drinking high quality herbal teas are essential to one’s well-being.

For this Rilakkuma Enherb collaboration, they released a special holiday tea and tea products (even a diffuser!). Ah, San-X – always aiming straight for my heart. 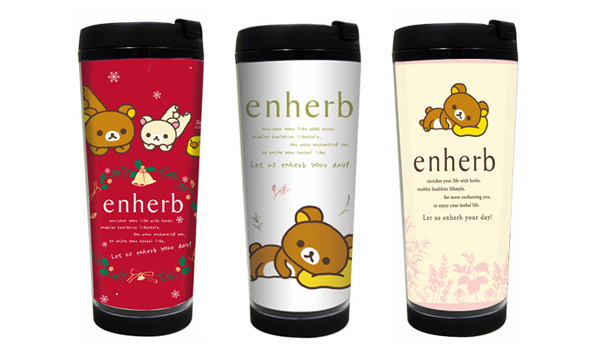 From what I understand, they even gave out a special holiday-themed Enherb Rilakkuma folder for customers who bought a tea package. This whole set seems so relaxing – a perfect fit for Rilakkuma!